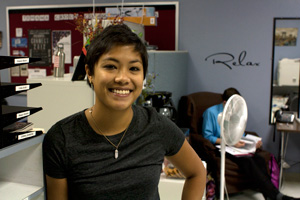 The New Age of Police Scanners and Their Impact on Journalism
By Joelle Cabasa, Photographer/Videographer
“There’s a 4-84 (petty theft) on West 6th Avenue and Esplanade.  He stole a man’s wheelchair and has taken to crashing into buildings.”
(Static)
“We have a possible 4-15 (disturbing the peace) at West 3rd Street and Pomona”
“There are reports of a man rattling the door and shaking the fence, trying to get in.  Now he’s picking up a potted plant and shaking his fist. 10-23 (standby) on this one.”
These events transpired in a matter of five minutes, overlapping each other and each more entertaining than the next.  On that lazy Sunday, nothing was more entertaining than a live stream audio of the Chico dispatcher.  Yup, you heard right – a free live stream of the chaos in Chico on Sunday.
Next call in – with my handy dandy police codes in hand.
“There’s been an 11-82 (accident: property damage) on East Avenue, right off of Nord.  The car is on fire and we have the fire department reporting to the scene.”
Now I know what I’m doing during my downtime on the weekends.
For journalists without a police scanner at the ready, perhaps jumping to Seattle is more appropriate?  In the last month, the Seattle Police Department has released 51 new Twitter accounts, where the average citizen can scan, uninhibited, real-time updates on Tweets by Beat, @SeattlePDB2.
Snooping through the latest happenings in real time versus Twitter, in any moderately populated area, is cause for concern, especially – for a journalist.
A journalist’s bread and butter is to be on the scene right alongside the police.  Getting a stab at pushing your colleague’s story, which took two weeks to gather, off the front page with a simple hit-and-run comes with the territory.
So on the other hand, maybe one doesn’t want to wait for the hourly-automated Tweets by Beat?  Just something to keep in mind.
Decisions, decisions.  Twitter or scanner?
Although it’s not 1997 and the Wireless Privacy Enhancement Act has been put behind us, wielding the police scanner is like having a teleportation device at your beck and call. You know, like the Batman’s calling card.
Admittedly, it is reassuring to know many of the old-school journalistic practices are moving into the new age of public relations that is our playground: social media.
(Insert applause here)
So for now, I guess Code 5 (stake out), while things continue to progress in the world of journalism.

3 Replies to “A New Kind of Wavelength”