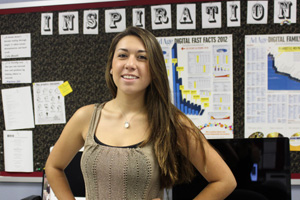 By Kylie Munoz, Account Executive
Move over traditional television ads. Consumers now have a new form of inspiration and direction for holiday shopping–social media.
Social media is playing a bigger role in how consumers purchase gifts for friends and family during the holiday season, a new study by ConsumerSearch.com has found.
When it comes to shopping inspiration, the survey found that 64 percent of respondents depend on advertisements, emails, and retailer websites. And 62 percent count on social media, including user reviews and online wish lists, as well as a variety of content on Facebook, Pinterest and Twitter.
What’s even more interesting, but maybe not shocking, is that only 17 percent of respondents said they prefer to research and shop in stores as opposed to researching and shopping online.
“Retailers have begun using social media more to reach shoppers with deals and information and we can expect this trend to become even more popular over the next few years,” said Carey Rossi, editor-in-chief of ConsumerSearch.com.
If you’re looking for gift ideas, Pinterest, not Facebook, is where you should look, another recent study conducted by BizRateInsights.com has found.
A total of 70 percent of online consumers go to Pinterest to get inspiration on what to buy, while only 17 percent visit Facebook for the same purposes.
Mark Zuckerberg and the Facebook team have become aware of this pinning frenzy and have recently launched a new test feature for a few select retailers, such as Pottery Barn and Victoria’s Secret. The ‘Collections’ feature is similar to Pinterest in that you can ‘collect’ or ‘want’ items from the retailers they have listed. These items are then saved to a user’s ‘Wishlist’ on their Facebook timeline.
So whether you’re looking at a retailer’s website, tweeting, ‘liking’ or pinning, you’re sure to find great gift ideas for loved ones this holiday season with much thanks to social media.
Happy shopping!