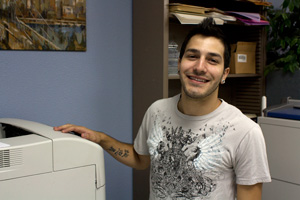 By Jonathan Menager, Assistant Account Executive
It should come as no surprise that technology has had a very profound impact on journalism. As tech giants such as Google (reporting 2012 Q3 consolidated revenues as high as $14.10 billion) begin to surpass traditional media companies in terms of financial earnings, the effect of technology on the field of journalism can’t be overlooked.
The youth of today can easily identify with companies such as Apple and Google, but ask them what McClatchy and Gannett are and you’ll probably get blank stares.
What about social networking? Surely, social networking and social media didn’t exist prior to computers or the Internet.
Social media and social networking are entirely new concepts that caught like wildfire practically overnight when Friendster first went live in March 2002. This phenomenon is still kept alive today, over a decade later, by popular sites such as Facebook and Twitter.
But don’t get confused about social media’s place within the walls of journalism. Social networking has come a long way from the Livejournals and MySpace pages of yore. Believe me, there are companies out there that will pay a great sum of money to do what most of us do for hours at a time each day–Network and blog online.
Prior to my transfer to Chico State, I worked at a social media marketing agency known as Fanscape based out of Los Angeles, and one of my tasks was content creation for the company blog DigitallyApproved.
If we look back 18 years ago, blogs were just starting out, but they were a far cry from the marketing tools they can be today. Technology and the Internet have begun to transform the way we read and receive our news in today’s society.
Social media are, in fact, changing journalism. Upon my arrival at Chico State, I found it strange sitting in class and learning about Twitter and receiving lectures on Facebook, but this is journalism today.
My Fanscape job relied heavily on what I had learned in my journalism classes, although the company I worked for was in no way associated with “news” per se.
The success of Fanscape’s blog meant more credibility for the company. More credibility meant more business.
That being said, news companies need technology just as growing tech companies need journalists. Social networking has become a useful outlet for newspaper companies that can no longer afford to print their papers and distribute them physically. What is now being coined as “social journalism” has become a very handy tool in virtually every news corporation’s toolbox.
It’s bloggers and journalists like me that help to push these trends and change the social scape. Citizen journalists are even able to post images of breaking news events and blog on the go from phones.
Journalism is changing, and with it, new opportunities are opening up for a more interactive and personalized news and information experience, all within just 20 years time.
What do you think the next 20 years will hold?