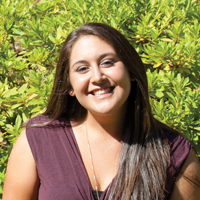 I have been designing websites for over a year, having taken both web design courses in the Communication Design Department at Chico State. After taking these courses, I thought I had a pretty strong grasp on the overall structure of a website. However I never would have guessed I had enough practice to build a 14-page website in only two months.

Tasked with creating Journalism Times by the Department of Journalism and Public Relations, our team needed to write, design, and publish the entire site before Thanksgiving.

The first step of the process was creating a basic structure for the site, which included:

To speed the process, the structure was originally designed and laid out in Adobe InDesign. 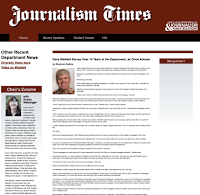 After making changes based on our client’s feedback, we began to develop the layout for the rest of the pages.

The week after the majority of our structure changes, I spent around 25 hours HTML coding the five pages that had completed content.

The week following, more changes. Not easy changes either, the way people make them seem when they are making suggestions. “Just make three columns instead of two,” someone suggested at a weekly meeting. “Also, can we just have these just a little bigger.” Changes aren’t a bad thing, but when coding, changes that seem small can create a chain of new adjustments. Changing the size of one index can mean changing the size of images, which means adjusting headings, bylines, captions, story placement and more.

After coding everything and thinking I could see the finish line, other issues kept popping up such as missing captions/credits for images, link and page consistency, useless dead links and more. The list was too long for being so close to deadline. There were over 30 images on the site and at least twice as many links to be manually checked one by one to make sure they were working properly.

Enter the help of my awesome team. Without their help the site review would have never gotten done. Dividing up the pages, we each checked the site for missing links, leftover shortcuts and any other errors. They were amazing!

I feel that this project threw me into one of the most stressful and difficult design pieces I’ve ever been a part of. If I build another site in the future, I will remember that building a stronger layout from the start, taking more time as a team to decide the way things should be navigated and trusting people who aren’t designers, not because they can help me code, but because they are the audience will all benefit me in the end.

I was new at coding when I started this project. I had all the pieces I needed to make this website successful and beautiful, I just had to be pushed to get it done. I feel so accomplished — I actually did it!

Check out the fall 2011 issue of Journalism Times.

2 Replies to “HTML (Hardest Times of My Life)”