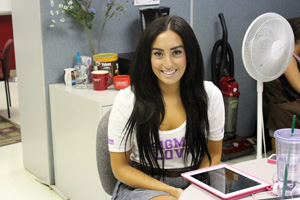 I stumbled upon the term public relations as I was choosing between the two journalism options that were presented to me on orientation day.

As I listened to my future adviser explain what public relations was, I thought to myself, ”Sounds sociable, that’s right up my alley.”
The first time I ever heard a clear definition of public relations was in my “Introduction to Public Relations” course my sophomore year at Chico State. Before that class, I categorized myself as a journalism student. Now, I like to think of myself as a public relations student.
Once I had a nice grasp on what public relations meant, I began to associate my major with people who were witty, smart and those who knew their way around the corporate world. I realized that a public relations practitioner must always say the right thing and know how to articulate their words through writing and verbal speech.
As a child my parents made the comment ”You better become a lawyer. You have so much to say and want everyone to hear your point of view,” on more than one occasion.
Now, as a senior approaching graduation I do not think of public relations the way I did as a sophomore, I consider it to be an art. An art that can take images, words and perceptions and project them into the world to shape an audience’s point of view.
To me, a lawyer and a public relations practitioner try to achieve similar things. Both present information, facts and an overall image to persuade the minds of those who are judging your client.
Even though I won’t be presenting the work I create to a courtroom full of jurors, I will be presenting it to the world. Using words, verbal and written, I can convey the messages I want my publics to see.
The art of law and the art of public relations share characteristics in my book. The upside to studying public relations is not only less student loan debt, but knowing how to present your work to virtually everyone in the world, not just those in a courtroom.

One Reply to “PR Major? It’s Cheaper Than Law School!”