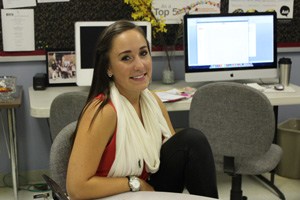 By Jillian Luchsinger, Assistant Account Executive
As we reach the end of October, it also marks the end of my favorite season, the conclusion of the Major League Baseball season.
While most have festively celebrated October preparing for Halloween with traditional orange and black decorations, I have spent the month preparing myself decked out with the same colors for the World Series.
Growing up in the Bay Area in a family of avid San Francisco Giants fans, you can imagine my excitement through October as my team proceeded to win their way through six elimination games to clinch a spot in the championships.
Since I can’t play in the majors, I’ve always found my place in the stands and at games as a fan. My dream is to one day get called up for a Major League Baseball team so that I can participate and “pitch” in the best way that I can.
So as I screamed, cheered and celebrated my way through game four when the Giants swept Detroit in the World Series, I couldn’t help but think of the lessons that a public relations professional could learn from the sport of baseball.
1. You can’t always hit a homerun.
There is nothing more exciting during a game than seeing a ball get launched over the fence, but players can’t always approach the plate with the intention of hitting a homerun. Sometimes, it is more necessary for a player to hit a sacrifice fly or bunt in order for a runner to reach a base.
In PR, we always have the intention of getting the most coverage for our client. True, it would be much more exciting to get a client covered by a huge, well-known publication or network, but it can’t interfere with the smaller opportunities that we can find in the process.
2. Going 3 for 10 is still a success.
In baseball, hitting 3 for 10 means a batter has an average of .300, which is a great achievement. That also means that the batter struck out 7 of 10 at-bats. Baseball players are taught to look more at the success of their plays, rather than failures.
In the PR industry it is rare that you will please your client every time you pitch an idea. Instead of getting frustrated because they don’t like 7 out of the 10 ideas you present, embrace the fact that they like three of them and build on those ideas.
3. It’s going to be a while, learn to love your team.
As a professional baseball player you commit to 162 regular season games. This includes a lot of travel, long days and nights, and all-around an extremely substantial amount of time around the same group of people day in and day out.
The PR industry is well known for having unconventional hours and group work on client accounts. It is best to create a sense of camaraderie with the individuals that you work with. Whether you’re in the dugout or the office, you want to know that your team has your back.
4. Be ready when your number is called.
Throughout a season, a team can lose players for multiple reasons, from injuries to suspension. In such situations, it presents the opportunity for bench players to step up and become influential teammates and players.
You can hold many different positions on a client account, from account executive to graphic designer. Regardless of the position, it is important to remember that even if you’re just support on an account, at any time you can have the opportunity to step up and shine.
5. It’s a mind game, change your pitch.
Baseball is a game of deception. It is about the pitcher getting into the batter’s head and making him think something is coming, keeping him on his toes and making him second guess his approach.
When pitching an idea to a client, it is also all about getting into their head and figuring out what they want. It is possible that they won’t like your idea, in which case, you shake it off and change your pitch.
6. The Golden Rule
Always remember, the best players don’t always have natural-born abilities, but commit to hard work and have the desire to improve and succeed using the skills that they have.